When Marty McFly traveled to 2015 in the movie Back to the Future, he encountered technology like self-lacing shoes and hoverboards. While technology isn’t quite there yet, it has come a long way since the 1980s.

In 1984, Apple released the Macintosh. It was one of the first personal computers marketed to everyday people, and it received a positive response from consumers and computer experts. 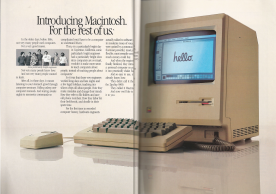 “The Macintosh is the best hardware value in the history (short though it may be) of the personal computer industry,” wrote computer columnist Bob Ryan in a 1984 inCider article.

Flash forward to 2015, and Apple is now on its sixth form of the iMac and frequently releases iOS and OS X El Capitan software updates.

The new iMacs include a 21.5-inch model with Retina 4k display and 27-inch 5k model. The current display 14million more pixels and 62,000 times faster graphics than the original iMac.

The Macintosh mouse was a small, rolling box with one button on the top. It allowed users to navigate a cursor around the desktop in a way they had previously been unable to.

Accessories available for iMacs include a wireless mouse and track pad which allow users to freely navigate their desktops using multitouch technology.

The Macintosh introduced software that allowed users to create a drawing in one program and then copy-paste it into another. This allowed for integration of multimedia in projects created.

Now, users can and photos, artwork and more into their documents. iCloud then allows users to share the documents they create across multiple Apple devices, including the soon to be released iPad Pro.

What do you think of the Macintosh? Do you think the iPad Pro will be as revolutionary as it was?

5 thoughts on “Back to the future: Looking back as Apple looks forward”